Theory of change in relation to arts and cultural development

Theory of change is a process that articulates how and why a desired change is expected to happen in a particular context. It is part of a family of program theories, which include intervention logic, logic model, program logic and theory based evaluation (Funnell & Rogers, 2011). The idea originated in the field of evaluation in response to the challenge of understanding causal factors that lead to desired community change (Anderson, 2005; Weiss, 1995).

Two separate functions can be identified for theory of change. The first is a “methodology to map out the logical sequence of an initiative from inputs to outcomes” (Vogel, 2012, p. 3); a process also known as “theory of action” (Funnell & Rogers, 2011, p. xiv). The desired long-term goals are identified first, followed by the steps to achieve these, and then the activities that need to be undertaken (Theory of Change, 2015). The second function of theory of change is part of a “deeper reflective process …amongst colleagues and stakeholders, reflecting on the values…and philosophies of change that make more explicit…underlying assumptions of how and why change might happen as an outcome of the initiative” (Vogel, 2012, p.3). Vogel posits that a theory of change approach is most effective when both functions are applied.

Theory of change and related practices are increasingly being applied in community-based change interventions. Funding organizations are more frequently requesting applicants to develop such theories in the process of conceptualizing their work and seeking support (Wolk & Stanzler, 2010). These ideas have begun to emerge in formal literature about arts participation over the last decade, and also in informal publications such web blogs that include advocacy by researchers and policy makers for theory-based approaches to arts practice.

Research undertaken by authors from disciplines outside the arts indicates a stronger utilization of these ideas. Program logic and theory of action, for example, were used in an evaluation of community-based arts organizations led by epidemiologist Kelaher. This choice of methodology assisted the project’s aims “to reconcile the focus on evidence-based practice in health and the more emergent and experience-based nature of arts practice” (Kelaher et al, 2007, p. 1). Early adopters of theory of change in the arts sector include the USA-based Animating Democracy project, which seeks to encourage “evaluative thinking” amongst its stakeholders (Animating Democracy, 2012).

Theory of change thinking can be found in contemporary examples of community music, for example. Project Rhythm, a youth development organization based in New York City offers a theory of change about how young people are empowered to become beneficial contributors to society through participation in their music programs. This organization believes that by implementing effective music programs, they can help young people improve their collaborative leadership skills, cognitive development (executive functions) and career readiness skills (Project Rhythm, 2015). This theory of change, as written, appears to be based on expressed beliefs, with no direct explication of evidence to support the program’s assumptions, although the organization’s website does list some research data about the relationship between music and positive youth development.

Clinks, a community agency based in London that supports the voluntary sector working with offenders, offers a more strongly developed theory of change for a music program for young people at risk of offending. Presented in a visual diagram (Figure 11.1), this explicates the relationship between Clinks’ program activities and the processes involved, with the agency’s expectations for participants in the short and longer term. Clinks (2015) proposes a theory of change that, by encouraging participants to articulate, both musically and lyrically, what they may otherwise keep hidden, provides an outlet for addressing personal barriers and motivations. While this document does not provide evidence on which the program’s processes or expected outcomes are based, thoughtful detail is offered about how evidence is collected for each of the program stages that will be used in the future to substantiate the organization’s theory of change. 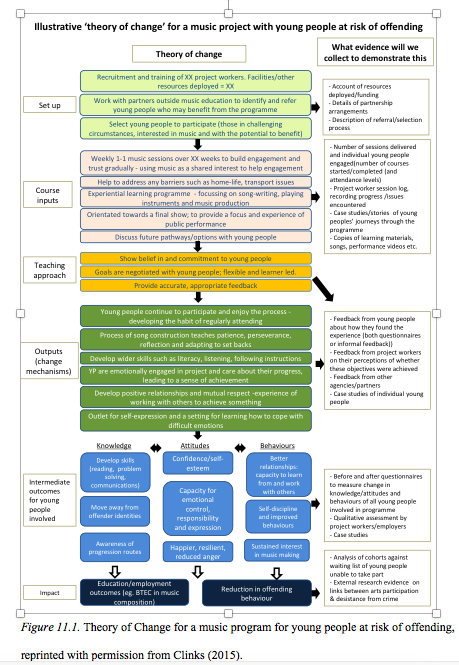 There are also critics of theory of change approaches, who argue that complex interventions can rarely be explained by a single theory, and that assumptions of a logical pathway from theory to action and outcome is reductionist and unrealistic in the real world. Not surprisingly, arts practitioners, who by the nature of their profession are more likely to work from intuitive assumptions and practice-based knowledge than logic, are amongst its detractors (Artplace, 2012; Etherton & Prenkti, 2007; Moss, 2012). Issues of concern include the perceived lack of capacity for logic-based models to encompass all the dimensions of successful arts projects and the unsuitability of the pictorial models often used for theory of change for depicting arts practice (Goldbard, 2010).

However, many of the criticisms arts workers make of these approaches do not seem to be based on well-informed views, but rather on a general antipathy to the relevance of theory to their work. For example, while prominent arts for change advocate Goldbard is amongst the critics of theory of change and other structured approaches to planning and evaluation, she concedes that they have some usefulness. She acknowledges the commonsense value of questions precipitated by such models including “what do you want to accomplish, what is required, what short- and long-term outcomes are anticipated?”(Goldbard, 2010). Given that answers to such questions are the major purpose of theory of change models, opposition to them may be injudicious. Moss, of US-based arts think tank Createquity, offers this flowchart (Figure 11.2) as a rebuttal of an arts leaders’ argument that “no logic model in the world” could capture how her faith in humanity is restored after attending a crazy MayDay Parade (Moss, 2012).  The image clearly demonstrates the theory of change and causal factors in the restoration of this leader’s faith in humanity. 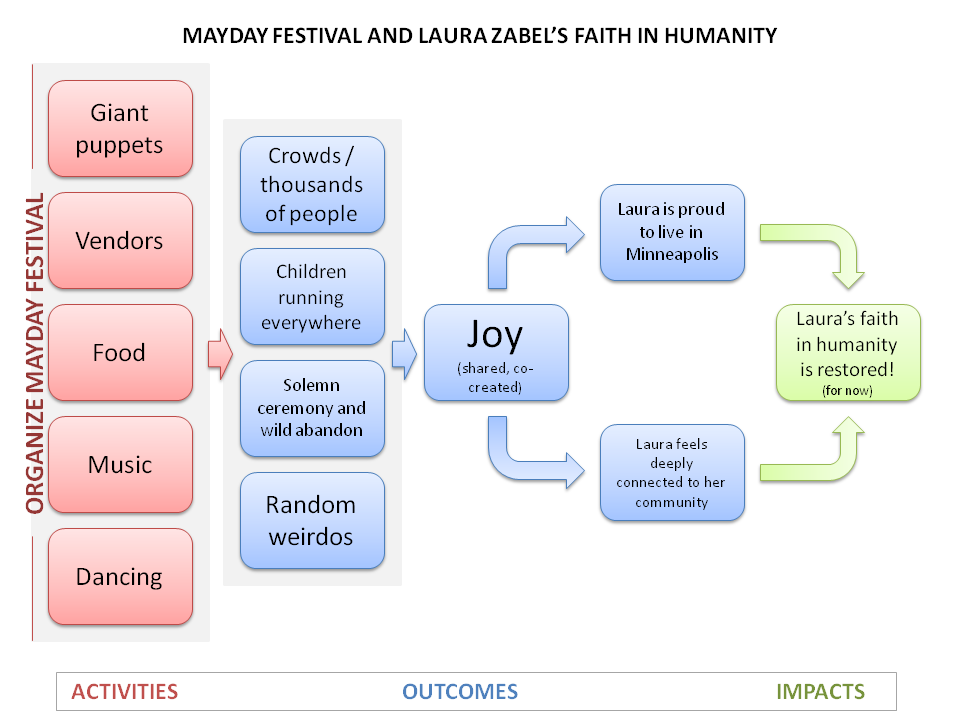 Anderson, A. (2005). The community builder’s approach to theory of change: A practical guide to theory and development. New York: The Aspen Institute.

Clinks (2015). Illustrative ‘theory of change’ for a music project with young people at risk of offending. Retrieved from http://www.clinks.org/sites/default/files/MusicProjectTheoryofChange.pdf

Vogel, I. (2012). Review of the use of “Theory of Change” in international development. UK: DFID. Retrieved from https://www.researchgate.net/publication/259999430_Review_of_the_Use_of_’Theory_of_Change’_in_International_Development