Art Central was a multidisciplinary arts project undertaken in Central Goldfields Shire in central Victoria between 2013 and 2015. The 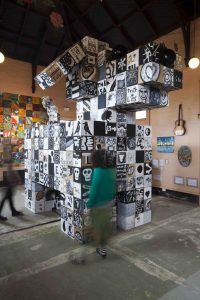 project was instigated by the Cultural Development Network to trial theories about what arts projects in local government contexts could contribute to positive cultural change, and the processes by which that might occur most effectively.

The program brought together professional artists from across the region into a residency with the local arts community; while encouraging individuals, businesses and organisations from across sectors (education, recreation, small business and health) to embrace the arts.  The project sought to create a lasting impact in the lives of participants and community by engaging influential local leaders and helping them understand and embrace the value of arts in their own organisations and in their partnerships and sponsorships with their communities.

The project was underpinned by the work and research of CDN over ten years, which has demonstrated that the arts play a key role in the cultural vitality of communities of all kinds, and that the key to animating the culture is to tap into ideas, activities and values that lie within existing institutional and community organisations. The project led the arts component of a larger State Government investment in regional health and well-being over three years and beyond.

Background to the project

Like many rural communities, the Central Goldfields Shire has experienced a range of social and economic changes in the last few decades. Located in Central Victoria, it is approximately one hour’s drive from the main regional cities of Ballarat and Bendigo and about two and half hours drive north-west of Melbourne, the capital city of Victoria. The Central Goldfields region has a unique combination of natural environment, with significant manufacturing, retail and tourism potential. The Shire has a population of more than 12,500 people, a rich gold rush history and relatively cheap housing. It is celebrated for tourist attractions, which includes stunning heritage buildings, wineries, the historical Maryborough station and farmer’s markets. Other prominent townships in the Shire include Bealiba, Carisbrook, Dunolly and Talbot. Maryborough is the Shire’s main business centre with a population of approximately 7,500.

While rural and regional towns in Victoria are no strangers to the cycles of ‘booms’ and ‘busts’ of droughts, bushfires and global economic fluctuations, these events eventually take a hard toll on communities. Decline of industrial employers over the last few decades has left a legacy of unemployment, in addition to a constant flow of people accessing public housing in the Shire that is compounded by limited access to higher educational opportunities in the area. For the past few decades, townships in the Central Goldfields Shire have been one of the most socio-economically disadvantaged in the State of Victoria. According to a 2007 report by Tony Vinson, Maryborough is suffering from the effects of entrenched poverty, where unemployment rates are double the state average, and food security and educational attainment are the among the lowest in the State.

In 2007, as part of a whole-of-community planning and development initiative, Council commissioned a study on the Shire’s economic, social and educational challenges. The study highlighted socio-economic problems as well as challenges with community identity and values. According to the report, the community had become ‘resilient’ after decades of ‘toughing out the hard times’, but its culture lacked a sense of aspiration, achievement or positive future visioning (Perry, 2008). Decades of hardship and disadvantage had resulted in a resilient outlook in a community resistant to change – “don’t fix it unless it’s broke” mindset (Central Goldfields Shire, 2011).

Faced with such unfavourable statistics, CGS Council decided to embark on a community culture-focussed model of transformational change as one of its six key priority areas (Meddows-Taylor, 2011). As culture encompasses one’s values and aspirations (Hawkes, 2001), the crux of this transformational strategy was to acknowledge that cultural change is key to advancing the community. As Chris Meddows-Taylor said, a shift in the community culture was needed – ‘one where the future would not mirror the past’ (Green, 2011).

One initiative to help spur the transformational change agenda was the Maryborough Neighbourhood Renewal (NR) project. This was a precursor to a community development program entitled Go Goldfields (GG) that commenced in 2012. The $2.5 million strategy funded by the Department of Human Services targeted change in the 0-19 age bracket, and included money for early years speech pathology, literacy and support for parents.

The Art Central project was birthed in discussions between John Smithies, Director of the Cultural Development Network (CDN) and the then Mayor of the Central Goldfields Shire (CGS), Chris Meddows-Taylor, during this period that the Shire was investing resources in developing a community initiative to address its socio-economic disadvantages.  CGS Council had a vision to build a highly desirable community to live, learn, work and visit. Following Council’s agenda to bring about community culture change and “develop an aspirational culture” (Meddows-Taylor, 2011), the Art Central project was established with a vision of reorienting the community. It was developed to challenge all elements of the CGS community culture that Council had identified as its priority, shifting emphasis from the dominant values of resilience and conformity to values in which hope, aspiration are prioritised and achievement is considered possible.

Before its official start in 2013, Art Central was in development for more than two years with local government, artists, businesses, sports associations, primary and secondary schools and a diversity of not-for-profit organizations. During this time, informal relationships were forged between leaders from CGS Council, education, sports, business and arts sectors and CDN, project partners. CDN supported and recommended the establishment of a community leadership group (CLG) as partnership model for the project involving community leaders from the fields of arts, education, health, business, sports and recreation. By involving and embedding community leaders in the project, CDN hoped that influential individuals in the community would keep the work ‘alive’ past the lifespan of this project. CDN hoped that this would add an extra layer of strength to the project and increase the potential for new partnerships to be forged in sectors outside of the project.

Another important intended outcome of the Art Central was the encouragement of the emergence and mentorship of local artists. From the beginning, CDN stressed the importance of having the same lead artists for the duration of the project to maximize the achievement of positive, sustainable long-term outcomes. Hence, three resident artists and mentors were hired for the project: Fiona Blair (The Old Van), berni m janssen, Peter Widmer and Geoff Bonney (Ratartat), who brought a wealth of experience in visual and literary arts and community engagement. Their role was to identify, engage, recruit and work with local artists to transfer skills so that they could continue to work skillfully and effectively with their communities at, and beyond the completion of the project.

2013 also marked the start of the Go Goldfields (GG) strategy by the Central Goldfields Shire Council, and the decision to link and partner both projects were seen as unique opportunity to observe how the arts could contribute to positive youth development and literacy. GG included a small arts component and was hence enlisted as a project partner and resource for Art Central. GG did not have adequate funding to support a full community arts project, so it was decided that a joint investment from the Australia Council CCPI program would enrich Go Goldfields projects that targetted disadvantaged communities in the Shire through child and family literacy programs. As a result, GG combined its community arts funding with Art Central funds with the view to enable arts integration into its five strategic outcomes.

From January 2013, professional artists, organisations and community individuals and groups engaged in a number of collaborative creative activities that explored local community aspirations. Of particular success was the strong relationships 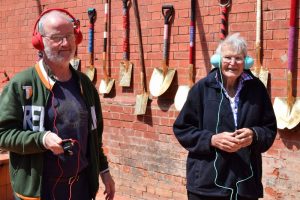 forged with the health (particularly mental health and disability) and education sectors. The project housed its activities at the ‘Art Shop’; a working studio space and gallery located on High Street in Maryborough, with project activities also extending to other townships in the shire. Activities took on a ‘street based approach’, propelling art into the community and boosting awareness of project.  The  Museum of Truth and Lies project was undertaken in October 2014.

Projections from the Video Architecture Community Colouring Competition featured at the opening of the Museum.

Art Central is a Creative Community Partnerships Initiative of the Australia Council,
the Australian Government’s arts funding and advisory body.