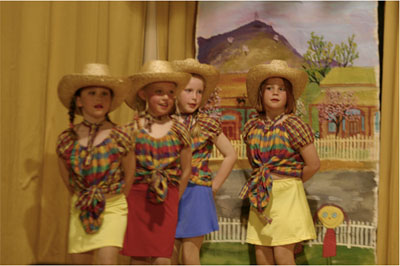 Photo: Wedderburn’s children in performance.This project was developed by CDN in partnership with the at La Trobe University, Bendigo. It began life as a ‘triple bottom line’ audit of five small towns in central Victoria. led the research program that gathered and analysed local data against ‘sustainability indicators’ in social, environmental and economic terms.

This project was developed by CDN in partnership with the Centre for Sustainable Regional Communities at La Trobe University, Bendigo. It began life as a ‘triple bottom line’ audit of five small towns in central Victoria. Dr Maureen Rogers led the research program that gathered and analysed local data against ‘sustainability indicators’ in social, environmental and economic terms.

When the Network got involved in 2001 and added the ‘fourth pillar’ of culture to the equation, this academic research study was transformed into an arts-led community engagement program actively involving hundreds of people in the towns of Dunolly, Talbot, Carisbrook, Maldon and Wedderburn. Artists were commissioned as animators and interpreters. The processes of collecting, interpreting and expressing the research data were transformed. Thanks to the arts, the elusive element of active engagement by community members was achieved. The results exceeded all expectations.

Thanks to Andrea Hicks, a visual artist and community activator, schools, children, tertiary students, local businesses, councils and community leaders were drawn into the project. They made it sing. During 2002, Andrea co-ordinated a massive undertaking: countless townspeople made (and later exhibited) a range of artworks in clay, on fabric, on film and on paper that explored the research themes. These were created at workshops led by local artists Andrea commissioned to share their skills. They were exhibited at the project’s finale events in each centre’s town hall through October 2002.

Another critical ingredient in this project’s success was the creative input of Craig Christie, a composer, writer and director who worked with townspeople to produce an original musical theatre production that drew on ideas shared during focus groups that explored social cohesion. The show, Right Where We Are, celebrated real-life stories of experience in small country towns. It was performed and staged by local people at the finale town hall events. Each night, a local talent show warmed up packed houses in all five towns before the curtain rose on Right Where We Are and then the roof nearly lifted off.

Local filmmaker, Philip Ashton caught it all on camera and produced a documentary of the project including the early planning stages. This film, A Journey in Community Building and a CD of songs from the theatre show are still available for sale. Local artist Anne Moloney has designed an interactive website that depicts the social connections in each town along with research material and project highlights.

A key reason for CDN’s involvement in the Small Towns: Big Picture project was to promote the value of the arts in community development, economic development, and environmental management in regional communities, and to strengthen connections between the arts and academic institutions and policy bodies in the regional development field including local government.

The partnership with the Centre for Sustainable Regional Communities at La Trobe University has proved to be a successful way of promoting the value of artists as ‘engagers’ of community action. The key researcher, Dr Maureen Rogers, in her discussions and presentations to academic and policy colleagues ends her story of the Small Towns: Big Picture program with the words: “this researcher will never go into a community without an artist again”. She made this comment to the 300 strong audience at the Local Government Community Services Association of Australia National Conference, Just and Vibrant Communities in Townsville in July 2003 after she and Judy Spokes had made a presentation about the project. Judy Spokes and Maureen Rogers made a presentation about Small Towns Big Picture in Kamloops, Canada, at the Cultural Future of Small Cities conference in May 2005.

In April 2003, the visual arts exhibition of the project (curated by Andrea Hicks and comprising mainly children’s artworks) was launched at the City Gallery in Melbourne. This was a rare example of country arts showing in the city rather than the other way around. This event was also the premiere of A Journey in Community Building, the video documentary of the program by Phillip Ashton. This screened on a loop during the six weeks of the exhibition season. Also premiering on the opening night of the exhibition was the CD soundtrack of Right Where We Are, featuring the songs from the musical theatre show created with townspeople by Craig Christie. A live performance of excerpts on the night was also a big hit.

Many of the original artworks are now embedded in the public spaces of the towns or hang in community centres and schools as a lasting legacy of the project. The permanent artworks to be installed by the Central Goldfields Shire Council together with Celebrating Carisbrook, a community festival in March 2004, are further tangible results. An arts policy for the Shire is another important development encouraged by this project.

Artist Andrea Hicks has gone on to co-ordinate various community arts activities in Carisbrook and Maryborough that create a high profile for the creative dimension of community building. This development work has led to the commissioning of a community public art work program in Carisbrook that was informed by the Small Towns: Big Picture social research. This new ‘legacy project’ was supported by a VicHealth Local Government Arts and Environment grant.