Objective: Positive sense of place in the local built and/or natural environment to be enhanced

Outcome: Positive sense of place in the local built and/or natural environment is enhanced

Measure: Positive sense of place in the local build and/or natural environment enhanced

By positive sense of place, we mean how we experience and make meaning of our environment both natural and built and how we describe, interact and value it.

Sense of place is generated from the meanings that are associated with a place (Tuan, 1977; Poe, Donatuto and Satterfield, 2016) which can be based on physical setting and the experiences we have in a place (Stedman, 2003, Tuan, 1977). Central to sense of place are the emotional connections between people and place (Moore and Graefe, 1994). The meanings connected with a place are often developed over time and linked to social and spiritual connections and environmental learning (Ingold, 2000). Sense of place can be linked to the notion of authenticity (Sepe, 2013) in that a place is “unique, distinctive and rooted in the local” (Southworth and Ruggeri, 2010). Positive meaning and connection to a place is in part dependent on the experiences it affords people who spend time there (Ingold, 2000). The development of a sense of place is influenced by a person’s culture as the meanings that are shared within a cultural form the basis upon which a sense of place is constructed (Steadman 2003). One study found that people’s sense of place was derived from four dimensions: ‘place making activities, cultural and familial heritage, personal and emotional experiences, and social-relational connections.’ (Poe, Donatuto and Satterfield, 2016). Attachment to place has been found to be significant for personal and community sense of belonging (Cuerrier et al., 2015) as well as increased desire to care for environments (Eisenhauer et al. 2000)

One research study into the effects of major cultural events on a city’s inhabitants found an increased sense of place and local identity resulting from such events (Liu, 2014).

Sound walks that bring together sound art, oral history and cultural geography can provide a more complex experience of place. The combination of located sound and memory can result in a deeper sense of rootedness and place. Notably, this was also experienced by those who did not know the area (Butler, 2007).

Community cultural festivals can increase a community’s sense of itself and its place through organising and engaging in inclusive activities based in a location. Such festivals provide an opportunity for a community to express its identity and offer an identifier of place and people (Derrett, 2003).

Enabling people to engage with art in a natural setting can engender and appreciation and sense of place as presenting artworks in nature encourages the re-imaging of place (Marks, Chandler, and Baldwin, 2016).

Activities and processes contributing to this outcome

As of April 2021, there were 7 activities in Takso selecting this outcome with 4 completed and evaluated. Types of activities undertaken to achieve this outcome include:

Over the 4 completed activities that addressed this outcome, 115 people responded to the evaluation question. On a scale of 1 to 10, with 1 being not at all and 10 the most imaginable, respondents reported an average pre activity level of  6.6 for this outcome and a post activity level of 8. 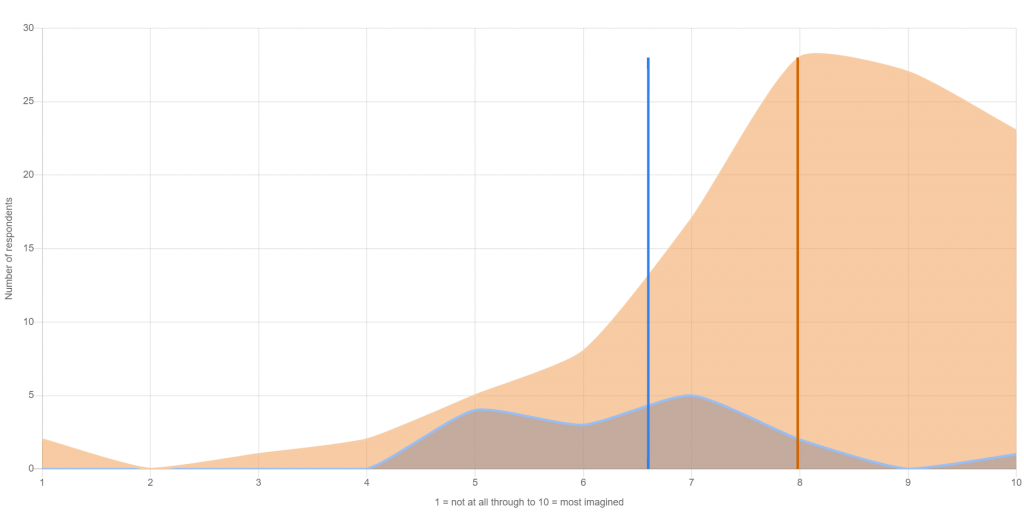 Ingold, T. (2000).The perception of the environment: Essays in livelihood, dwelling, and skill. London: Routledge.

Southworth, M and Ruggeri (2010) Beyond Placelessness, place identity and the global city. In Banerjee, T & Loukaitou-Sideris, A. (2010). Companion to Urban Design. Routledge.